This article is part of a #NoMatMondays series highlighting corruption and regulatory failures by the City of Chicago and documenting the environmental violations of Tadin family companies doing work as city contractors.

Chicago is a city known for corruption in a state known for corruption—a place where donations make friends and friends get contracts. But corruption also means direct, long-term environmental harm. Contractors like Michael A. Tadin and his family have spent decades making millions from city government by polluting city residents. And under Mayor Lightfoot, they’re making more money than ever.

By the time the city halted the scandal-ridden Hired Truck program in 2004, Michael A. Tadin (MAT) Sr. had already been paid more than $40 million to rent vehicles and equipment to Chicago in contracts stretching back a decade.

The private rental program was one of mayor Richard M. Daley’s biggest scandals in years. The city paid tens of millions to companies owned by well-connected contractors to lease trucks that often sat around doing nothing. Tadin, who grew up with Daley in Bridgeport, benefited greatly but was never charged. When the city ended the Hired Truck program, Tadin said he was fed up with negative press and leaving the city contracting business for good.

Spoiler alert: he did not leave the city contracting business.

Instead, Tadin now has more, and bigger, city contracts than ever before. Tadin family companies made nearly as much under a single year of Lori Lightfoot’s administration as they made the entire time Richard M. Daley was mayor. (You can explore Tadin family contracts, citations, inspections, and payments using this interactive dashboard: http://bit.ly/TadinDashboard).

Under Mayor Daley, over the better part of a decade, Tadin companies were paid $44 million by the City of Chicago, according to the city data portal. Under Mayor Lightfoot, in 2020 alone they were paid $30.8 million. There were over a hundred payments, with about a third of the money coming from the Chicago Department of Transportation, another third coming from the Department of Water Management, and most of the remainder from Streets and Sanitation. 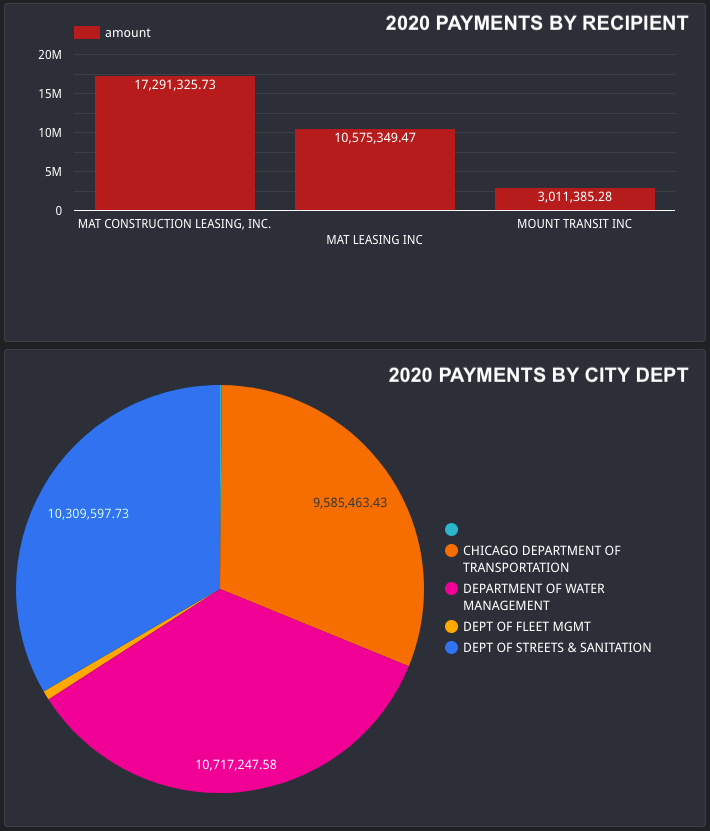 Building on his father’s success, Michael A. Tadin Jr. started MAT Construction Leasing in the late 1990s, then later MAT Asphalt, adding to his father’s companies Marina Cartage, MAT Leasing, MT Trucking, and T&B Limited. This is not a complete list; between them, the Tadin family owns at least eighteen companies.

These are the contracts that are pending/currently active. By value the largest is a contract for operating a city-owned waste transfer station at 750 N. Kilbourn, awarded in 2010 and renewed every year since, racking up almost $100 million from the city. (See reporting on that contract from 2010 and 2018).

However their largest single contract was awarded under Mayor Lightfoot: $50 million to MAT Construction Leasing from the Department of Water Management.

At this point, you may be wondering: so what’s the big deal? A contractor is making money from city contracts. His son got into the family business. Is this really so bad?

Chicago is the most corrupt city in the country. The Hired Truck scandal wasn’t just about Daley rewarding his friends. There were companies posing as “minority owned” and “woman owned” that were found to just be renting trucks from Tadin, who is a white man. Tadin Jr. made donations to the tax assessor and got tax breaks on his mansion; later he was found using public parkland as his personal front yard. He made donations to Alderman Cardenas, the chair of the environment committee and alder for the 12th ward, who then advocated behind closed doors to help build MAT Asphalt across from McKinley Park. Most recently the city awarded the Tadins a $10 million tax incentive on a Marina Cartage property that was already built and operating. And even as the city has paid them millions of dollars to operate a waste transfer site, they’ve been cited repeatedly for illegal dumping and waste violations (our next #NoMatMondays story is a deep dive on this troubling business practice).

Additionally, part of the Tadins’ business model is that the companies all hire each other. The city gives a contract to MAT Construction for arterial resurfacing; MAT uses MT Transit for trucks and buys asphalt from MAT Asphalt. For example, the CDOT contract awarded in November is worth $8.8 million. It lists $3,418,379 in asphalt line items, meaning in just this one contract the city has effectively awarded $3.4 million to MAT Asphalt, which will produce that material while polluting McKinley Park. And even as the city funds MAT Asphalt, they are also rejecting affordable housing because it would be too close to the plant.

Neighbors For Environmental Justice invites all concerned residents to get involved and join us in demanding change, documenting these offenses against our health, and in taking care of each other when the city has failed us.

Chicago, Environmental Justice Back to top

Get Rampant in your inbox